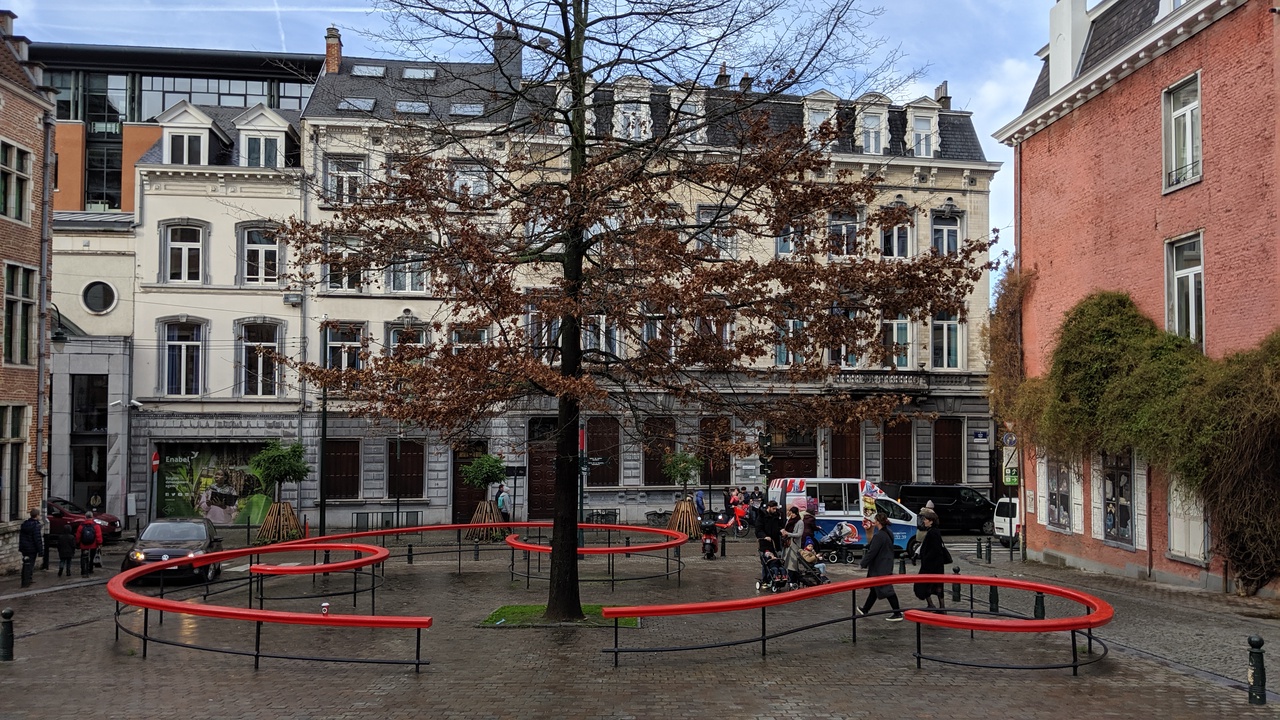 Cohort 12 is a special one. Not only it is the first time that 4CITIES is split into three tracks, but it is also the first time it introduces a “free style” in the feedback during a closing seminar at the end of a semester. This is what Stefan De Corte, coordinator of the programme, said on Friday 23rd January in a room of the Geography department of the Université Libre de Bruxelles. The idea of the encounter was to share something that had an impact throughout this first semester. “Brussels is a good start for a master’s in Urban Studies because it is really a messy city. I didn’t know there were so many things happening here”, shared Mateo Piette, one of the 4citizens in this cohort.

Many things happened in Brussels. For example, in Gare du Midi train station, where Lisa Kampschulte arrived for the first time to the city and lost the fourth wheel of her suitcase due to its weight. She eventually made it to her new home in Ixelles “kind of third wheeling”. Next to Zuid Station (the permanent reminder of language differences in the Belgian capital), in Anderlecht, Urban Femina saw the light last November, with a first urban walk to imagine new inclusive urban realities. Mili, Belu, Sara, Maru, Lea… they, among other 4citizens who have joined on the way, created this project in order to address the necessity of seeing the city through a feminist lens. 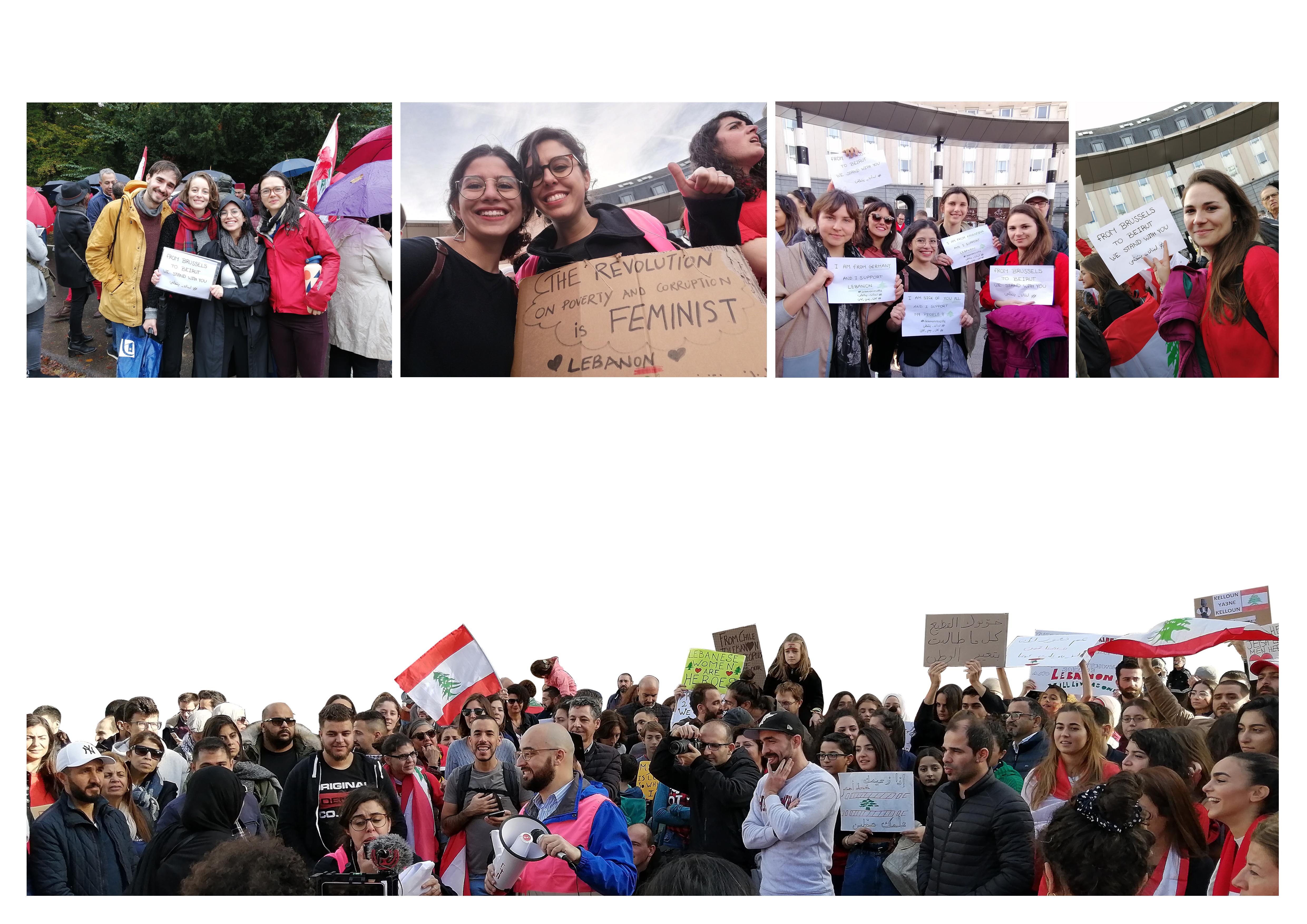 Two more kilometers towards the city center, Gare Central square was the setting for Aya Itani to have the opportunity to be an “activist from a distance and try to be in two places at the same time”, as she was an active part of the solidarity protests to the Lebanese people. For Claire Griffith it was very beautiful to see older women learning to ride a bike at a workshop in Molenbeek, and it was just as marvellous for Anne Krippler every time she saw the Andalouse sauce dripping onto the fries she ordered in Frit Flagey. For Anne, frietkots (fry stands) are unique to this city and “cannot be reproduced anywhere else”. Professor Mathieu van Criekingen said it well: “Don’t be afraid of the metanarratives: places are unique in their own way”. 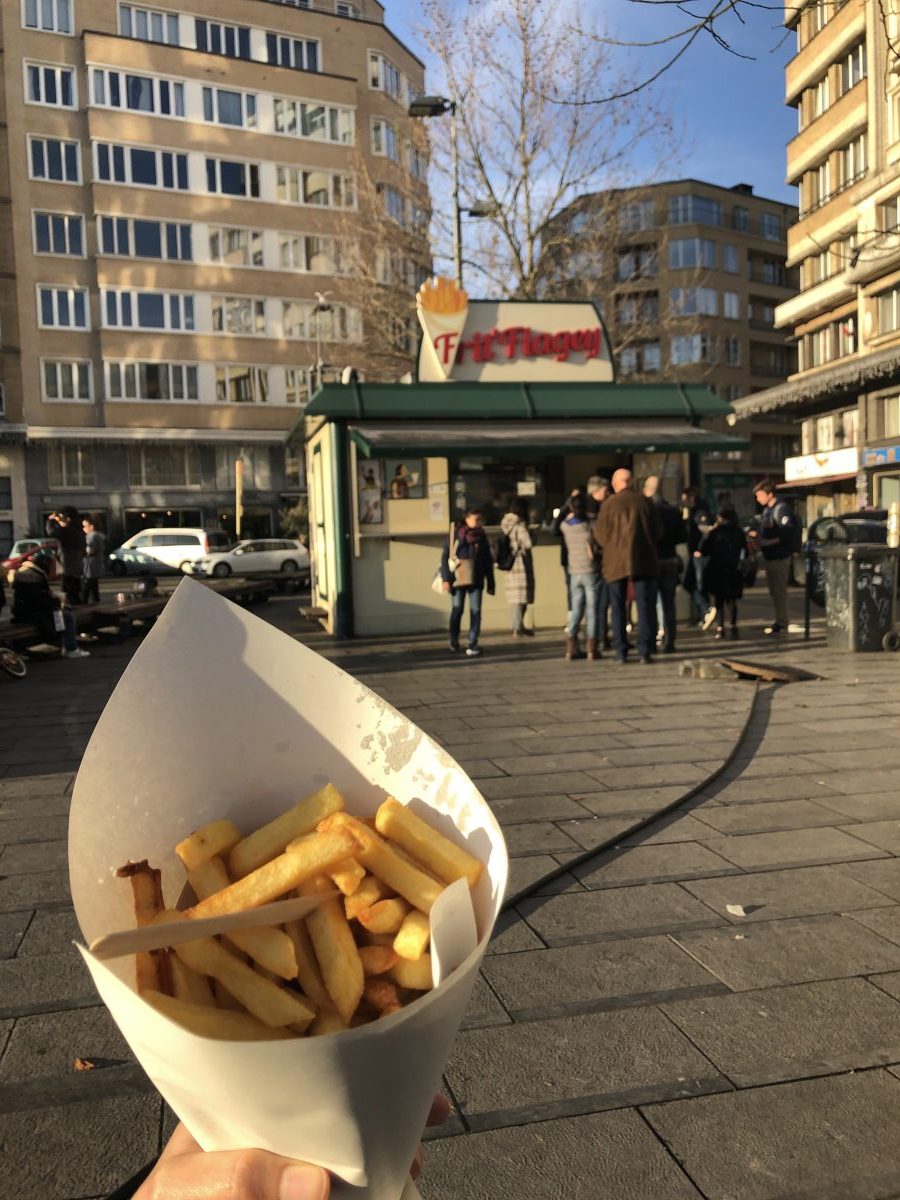 So unique and so messy is Brussels, that before he lived here, Shar Aung received the 2017 version of the STIB network map as a gift from a friend back home who warned him: “public transport there is kinda crazy, and always rerouting”. But even for the 4citizens in Cohort 12 it is possible to find beauty amid the chaos. Kriti Veerappan, unaccustomed to waiting at pedestrian signals in her former home city Puducherry, sometimes missed her bus in Brussels. This always seemed to lead to a series of unexpected walks she came to love, as “every single one of them was a wonderful adventure in discovering the city”.

Back to the classroom in VUB and ULB, where “39 strangers came together / From Earth’s four corners / Across continents and seas / And national borders / To learn about cities / The insights of Saskia Sassen / And to walk around Brussels / With David Bassens”, as Brian O’Shea recalled in a poem that references our lectures and the opportunities we were given to apply our knowledge in different excursions, such as the one to analyze the so-called global city in Brussels.

In the same way, for Julia Munroe, being from South Africa, it was remarkable obtaining a more nuanced perspective of the pros, cons and challenges around a question made, over and over, through an excursion in Antwerpen: “Is social mix desirable?”. For Christian Allmer, who lived in the European quarter, the most striking memory he takes with him is the constant presence of military forces in the area, that led him to question their purpose: “Are they there to demonstrate power? To guard against ‘broken windows’? To protect the European ‘elites’?”. 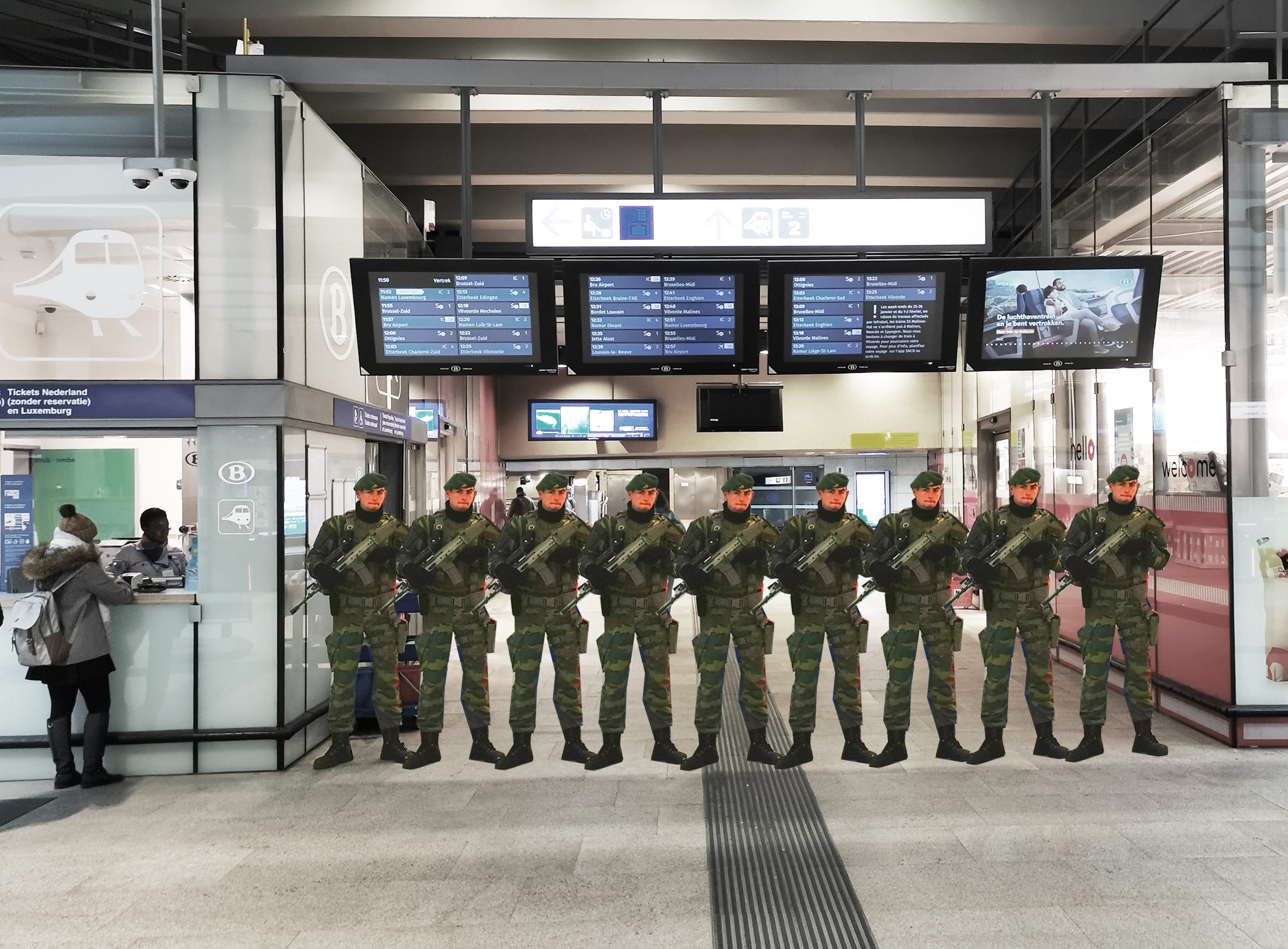 For Ryan Simpson, the purpose of the policemen in the streets of Brussels was to ask whether he had the proper license to play his accordion, which he brought all the way from Chicago and on which he played his own version of “Wrecking Ball” using the concepts gathered in each lecture:

“Don’t you ever say
It’s naturally this way
Gentrification

I never meant to start a class war
But this ‘hood doesn’t belong to you
And now the rent is too damn high
What would Jane Jacobs do?” 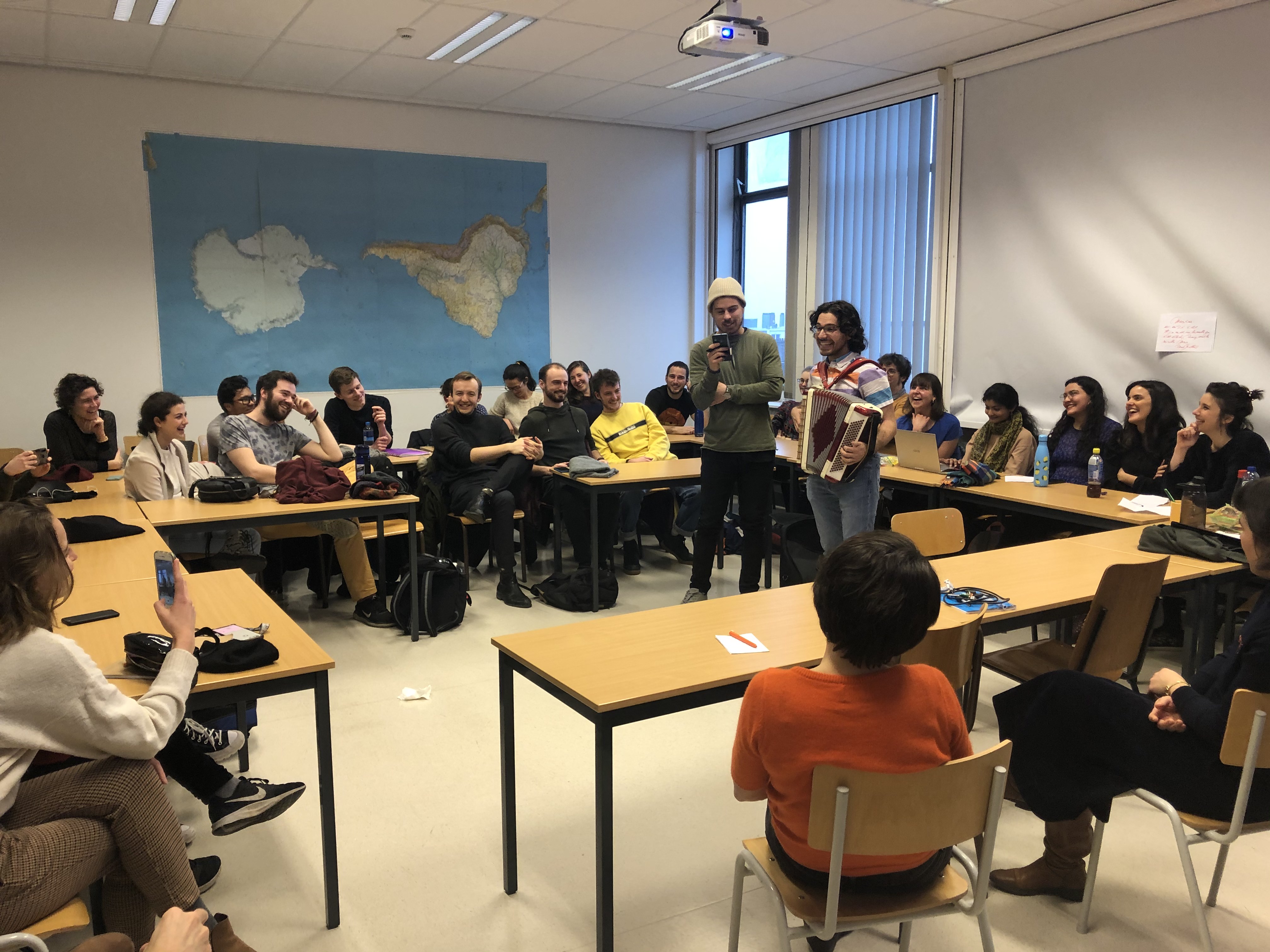 So it is: Cohort 12 has more questions than answers as we finish the first semester in this “surrealist city”, as Vivian Monteiro wisely recalled. “When I realized that surrealism was born here, I understood the city. Surrealism, according to André Breton, is the ‘contradictory conditions of dream and reality into an absolute reality, a super-reality’. This city showed me realities I didn’t want to see”. 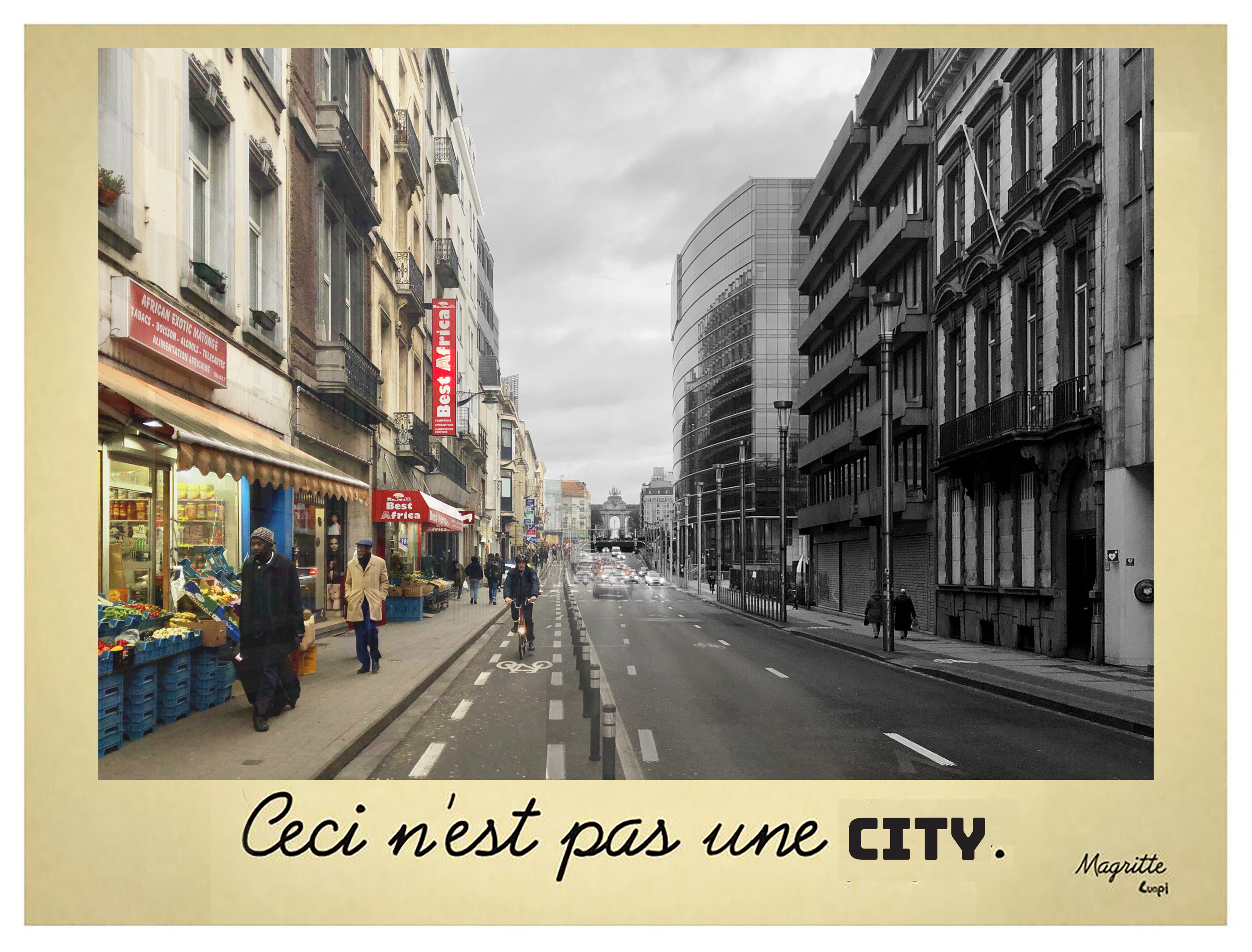 One thing is certain: “After leaving Brussels, you won’t consume or live the city in the same way”, pointed out lecturer Wojciech Keblowski, the only one at the meeting who was a student in 4CITIES and now teaches in 4CITIES. The next stop is Vienna, a city, in words of native Steve Ehrenberger, “that is always portrayed as one of the most liveable cities but after the first semester I wondered: for whom? Definitely not for the poor and refugees”. Indeed, there is still a lot to be answered, but bringing together Brian and Vivian’s contributions: “We are 39 strangers, from Earth’s four corners, who need to work together, different professions and expertise, for only by working together, we will be able to change something”.