During the first year of 4CITIES, all students complete a shared core curriculum. The five courses of the first semester, in Brussels, are divided between the Vrije Universiteit Brussel (VUB) and the Université libre de Bruxelles (ULB). The second semester also consists of five courses, and is taught at Universität Wien (UW) in Vienna.

European Cities in an Urbanizing World

VUB / 6 ECTS > Bas Van Heur, Gilles Van Hamme, Claire Colomb, Lena Imeraj
The course develops a select set of thematic perspectives on European cities in an urbanizing world. Focusing on processes of de- and reterritorialization as intrinsic to global urbanization, analytical and empirical attention is paid to the emergence of ‘Europe’ as an important scale for political, economic and social action. Within Europe, we can observe a restructuring of national states as well as subnational regions and cities, which has led and continues to lead to the development of various kinds of new territories, places, scales and networks. Different lecturers will highlight different but complimentary dimensions of European cities and their positionality within translocal networks and imaginaries. Seminars are offered to support you in the writing of a course paper on a European city.

VUB / 6 ECTS > David Bassens, Bas Van Heur, Nick Schuermans, Wojciech Keblowski
The course introduces students to the key theoretical debates in urban studies, focusing in particular on the spatial/geographical dimensions of cities and urbanization. It adopts a theoretically pluralist approach towards urban studies. The course offers urban systems perspectives, debates political economy perspectives such as world-city formation, discusses urban diversity and segregation, focuses on transport and mobility issues, and explores the intersections of culture and urban development. The course offers a mix of regular sessions, discussion seminars, and a choice of topical excursions in Belgian cities. Students are evaluated on the basis of a group presentation and a written exam.

ULB / 5 ECTS > Mathieu Van Criekingen
The course consists of a political-economy approach to contemporary urban change, using Henri Lefebvre’s conceptualization of the production of space as main theoretical foundation. It is composed of a series of lectures exploring in turn the role of the spatial practices of capital, state-territorial regulations, and grassroots-led urbanizations in contemporary urban change at various scales. To do so, the course combines insights from different theoretical frameworks, most notably neo-Marxist urban theory, neo-institutional approaches to urban governance, and post-colonial urban theory.

The overarching aim of this course is to help developing a critical perspective on now widely held representations that tend to naturalize urban change or reduce urban issues to mere techno-management problems, therefore obscuring their deeply political character. Cities are rather considered here as social constructs shaped by negotiations and struggles between uneven social forces in various territorial contexts and under evolving historical circumstances.

VUB / 3 ECTS > Tatiana Debroux
ULB / 5 ECTS > Mathieu Van Criekingen, Ana Dresler
The goal of Urban Analysis I is to make the students familiar with different research methods in the social sciences that are used to analyse the urban environment – its structures and processes. In particular, the students will get a taste of the following methods in class: secondary statistical analysis, urban semiotics and mental mapping, urban ethnography, and qualitative interviewing. In addition, the students will gain some practical research skills. Working in small groups, they will use the different methods learned in class to study a particular neighbourhood of Brussels in depth. At the end of UA I, the students will present their preliminary research findings to their fellow students and the 4CITIES faculty.

Urban Analysis II is designed as a follow-up of UA I, as two elements in a chain. Whereas the focus in UA I was on inhabitants’ and users’ views, perceptions and experiences of the neighbourhood, the focus in UA II will be on institutional actors – aka stakeholders –, their visions, projects and power. Accordingly, planning regulations, main actors and existing projects will be added to the initial neighbourhood analysis realised for UA1. The expected final product of UA2 is a development proposal, a master plan based on the students’ neighbourhood diagnosis. The course is articulated around four workshops and a final presentation which takes place at the end of January and involves colleagues from both ULB and VUB.

Principles of Urban Planning and Urbanism

4 ECTS > Walter Matznetter
This lecture course will take you through the long history of urban planning in Europe, from ancient beginnings to recent examples of urban management. Such a long view is helpful in understanding contemporary attempts to renovate, re-utilize and reinterpret urbanist and urban planning solutions from the more immediate to the more distant past. The basic structure of the course is chronological, but with an asynchronous focus on urbanist styles and planning philosophies across Europe. Civil engineering, zoning legislation, development planning, entrepreneurialism and project planning all arrived at different times and in different forms in our cities. At the end of the course, all students should have acquired a solid understanding of how urban planning developed in Europe and beyond. A wealth of material will be presented in the course, drawing on a great variety of sources, not only those available in English. Supplementary readings, however, will be in the language of instruction. When available, examples will be taken from the cities visited during the 4CITIES course, or from their neighbors.

3 ECTS > Kerstin Krellenberg
Sustainable urban development needs to consider and to find solutions for a wide range of challenges. Among those challenges are climate, demographic, and political change. These challenges raise the question of how integrated development and planning approaches that address these complex environmental-social-technical interactions and attempt to balance the requirements of urban sustainability can be successfully implemented. Concepts such as climate change mitigation and adaptation, resilience and social inclusion are considered. This includes critical reflections on digital infrastructures and systems, social innovation, commoning and sharing, nature-based solutions as well as other solution approaches in an integrated manner.

4 ECTS > Yvonne Franz
This course sheds light on the dynamic change of cities and neighbourhoods by looking at socio-spatial driving forces such as, e.g. migration or demographic change to identify fragmented lifestyles and small-scale segregation patterns. The notion of “urban diversity” includes processes and practices of a variety of socio-demographic criteria such as age, gender, ethnicity or income. This course entails independent literature-based analyses (group work) and critical discussions towards reflections on socio-spatial disparities as well as potential for social inclusiveness.

3 ETCS > Kerstin Krellenberg
The seminar provides an overview of the current state of discussion and enables participants to critically reflect on urban sustainability transformations, in the light of current political frameworks such as the Agenda 2030 and the Green Deal. Conceptual approaches and practical examples from around the world are presented. Thus, the theoretical basic knowledge is deepened through a strong application orientation. Based on selected case cities, students will critically assess urban sustainability transformations in the context of current change processes.

6 ECTS > Joshua Grigsby, Yvonne Franz, Kerstin Krellenberg
The general aim of Urban Analysis III (UA3) is to prepare students to conduct independent research for their Master’s thesis. The course is divided into two complementary parts: an intensive spring school on research methods, and a classroom course on the entire research process, from finding and understanding academic literature to developing research questions, selecting methods of data collection and analysis, and formulating a comprehensive research design. Students will work throughout the semester to move from an initial thesis research topic to a fully elaborated research proposal. 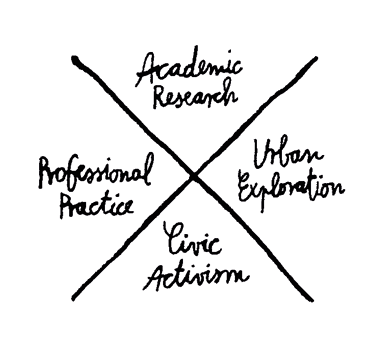 4CITIES is an international, interdisciplinary, immersive master programme in urban studies. Supported by Erasmus Mundus, its perspective is European while its context is global. Students learn to see the city, to hear it, to understand it, to engage it, and to choose their role in shaping it.

Discover what 4CITIES is all about »