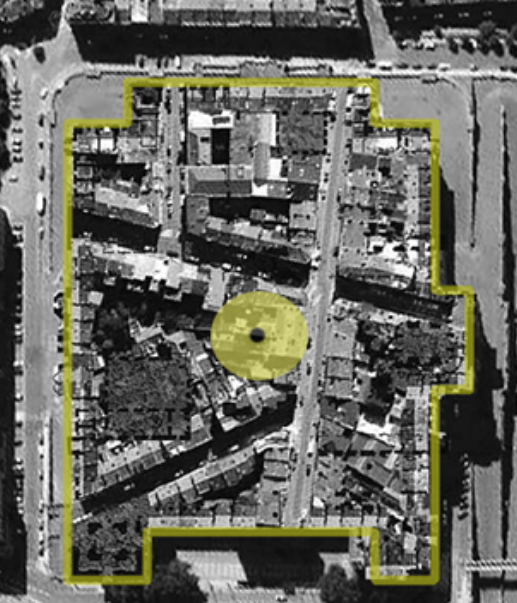 4CITIES graduate Mohammad Hammash (Cohort 03) has been living in Brussels since 2012 and working as an architect and urbanist. He recently co-authored the following article with Filip Momikj and first published it on urbanskop.net, which is an ongoing joint effort of the two to “deal with problems in the city rather than of the city.” Enjoy this excerpt and find the full article here.

The public space of Skopje is overloaded with elements that carry certain controversy among themselves. Today we are experiencing challenging situations where we need to learn how to treat the existence of these objects. Before taking any steps we must analyze other examples and try to understand the complexity of the matter. A proper example of doing so is the Justice Palace in Brussels.

1. CONTROVERSIAL INITIATION OF THE “JUSTICE PALACE “
In 1860, an international competition was organized in order to design the Justice Palace in Brussels. All 22 proposals didn’t manage to satisfy the committee. Due to this in 1861 the Justice Minister had nominated architect Joseph Poelaert as master designer of the new Justice building in Brussels. “Coincidently”, Joseph Poelaert was known as the king’s architect and also was one of the committee members and an influential governmental person. At that time, according to records, criminality was not an extensive problem in Belgium, yet a giant Justice Palace had the purpose to recreate the kings reputation as a philanthropic person whose dominant interest is justice and human rights.

2. CONTROVERSIAL LOCATION – “JUSTICE ABOVE ALL”
The future home of Justice was decided to be located in the upper town of the highest hill in Brussels. Even though the king claimed that he had no relation with the Justice department, the determined location was set at the most important axis straight ahead of the royal palace. More so the depicted area was not an empty land but a fully built working class neighborhood called “Marolles District”. A whole neighborhood was demolished and hundreds of people were forced to leave their homes receiving compensation through money or properties in the south of Brussels. Perhaps, all of this was not enough to satisfy the “Justice” criteria so the central surface of the new building was projected on top of the former “Galgeberg” hill, where in the Middle Ages perpetrators were hanged and exposed in front of the crowd. This spot used to have so many dead bodies that the founder of the classical anatomy Vesalius supplied himself with corpses from this hill in order to realize his studies. Finally, after the terrain was prepared for construction of the “New Justice” people around this area became so frustrated that even today the word “Architect” has a pejorative, insulting meaning. 3. WHOSE PROPERTY IS JUSTICE
The secretive colonization of Congo enabled Belgium to take advantage of the Congolese resources. There is no actual evidence that can prove a link between the bloody colonial resources and financial support of the Palace construction, but the fact that the king sponsored many projects and had direct relation with the architect makes all doubts valid. However, today the official funders of the building are Belgian tax payers which if true totally drained the Belgian working class.

4. WASTE OF SPACE
In the beginning of the construction process the population in Belgium was about 4 million citizens and Brussels had around 200 thousand habitants. Regarding this the design was far out of proportion in regards of the actual usage requirements and size of the project. The whole complex consisted of 8 massive courtyards, 27 large court rooms and 245 smaller court rooms with many corridors and multi leveled open halls. The whole palace was bigger than the St. Peters Basilica in Rome and was the biggest building in Europe in 19th century. The most disproportioned segments out of the whole structure are: 5. ENDLESS RENOVATION
The massive complex structure requires massive, complicated and expensive maintenance. The latest renovation process began in 1983 but due to financial and organizational issues only minor sections were redone. The whole process was so inefficient that in 2013 due to safety reasons the rusty and damaged scaffolding had to be replaced. We have to keep in mind here that these scaffolding are standing there since 34 years! The federal government had promised again that the renovation of the palace will restart this year and it will last till 2026.

6. SUSTAIN YOURSELF
The total budget for the whole renovation is estimated at a minimum of 100 million euro. Due to its controversial past the building could have problems gaining international funding, sponsoring or external financial assistance. On the other hand, the average annual budget that should satisfy the basic needs of the justice sector in Belgium is around 23 million, or 18% of the entire governmental budget. In other words the ridiculous estimated amount of renovation costs equals around 5 complete annual budgets. Therefore, the maintenance work will have to be financed from additional portions of tax money. Keep reading at urbanskop.net